Over the years I've learn't a lot of Samprathayam (or procedures) to be followed while keeping a Bommai Golu. Thought I'd share a few pointers.


Every Bommai Golu must have the following:

The Golu dolls are kept on steps called the Golu Padi. Traditionally 9 steps are kept...the significance of 9 are many: in honor of 9 nights of the festival or the 9 planets (nava grahas) or the 9 forms of devotion (nava vida bhakti) or the one I personally believe in is the 9 steps to attain Moksha (liberation from the cycle of birth - death - rebirth). However one could also choose to keep less than 9 steps. The steps should always be an odd number 3,5 or 7 steps and should not exceed 9 steps. The steps are covered with a cloth before the dolls are placed. Most people use a white cloth...I use a white cloth first and then drape a saree over it to add color.

2. Golu Padi reeti (or the rules to be followed while keeping the golu dolls)

The Kalasam
A kalasam is a representation of creation. A way of invoking The Goddess - Devi. Thro' the 9 days archanai (offering flowers) is performed in front of the kalasam.

First rice is mixed with manjal (turmuric powder) and kungumum (vermillion powder) and placed on a base plate. A pot (made of mud, brass, copper or silver) forms the base of the kalasam. The pot is filled with water. (5 or 7) Mango leaves and a coconut are placed at the mouth of the pot. The coconut is also smeared with manjal. Once the kalasam is placed, it should not be moved for 9 nights, hence care should be taken to ensure that the water doesn't go stale or the mango leaves don't dry up. (Tip: Add camphor and elaichi to the water). The Goddess' face is then tied on the coconut. A new red blouse piece is placed on the head of the coconut and the entire kalasam is decorated with flowers and jewellery.The method os setting the kalasam differs from region and also family traditions followed. I've explained what we have been practicing in house for the last 4 generations.
This is how the kalasam looks in our bommai golu 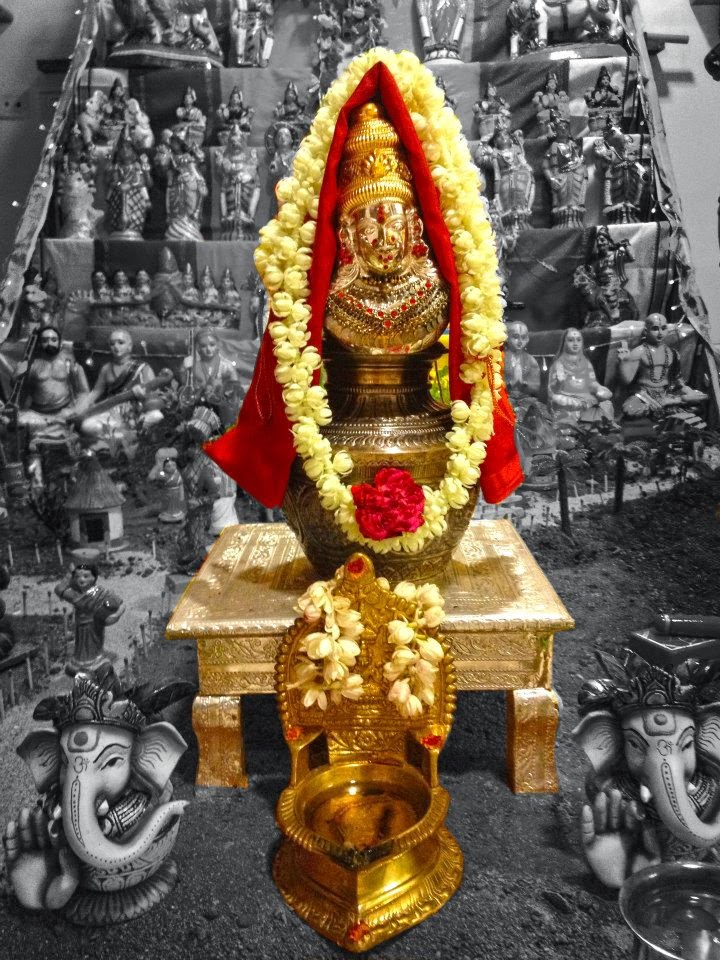 4. The Marapachi Bommai (Wooden Couple Dolls)
A male and a female form are chiseled out of special medicinal wood, decorated like a bride and a groom and presented to every girl at the time of her marriage. A tradition, that, perhaps began during the era of child marriages, what better gift to give a 10 year old bride...dolls. Over the years these dolls have become family heirlooms. Every Bommai Gollu reserves a special place for the marapachi dolls handed down over generations. 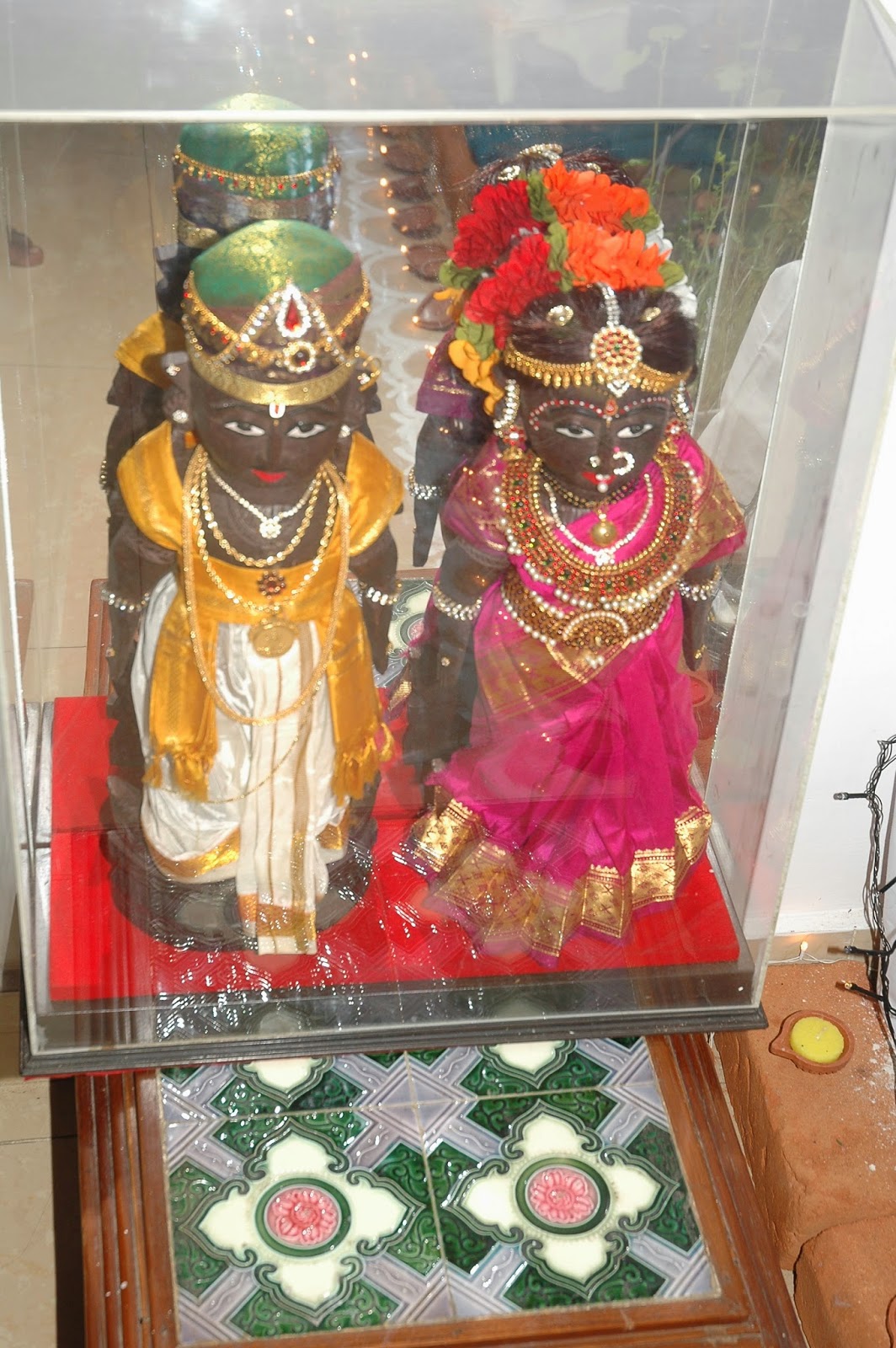 5. Kolam and Prasadam
Rangoli or kolam is usually put at the doorstep of the house and in front of the kalasam. The kolam is made of rice powder which attracts and feeds ants. Every day fresh prasadam is made and offered to the goddess. The prasadam is usually a different kind of sundal each day. Apart from the sundal prasadam, fresh flowers, water and fruits are also offered.

6. Kutu Velaku
A pair of kutu velakus' or a diyas are placed on either side of the kalasam. 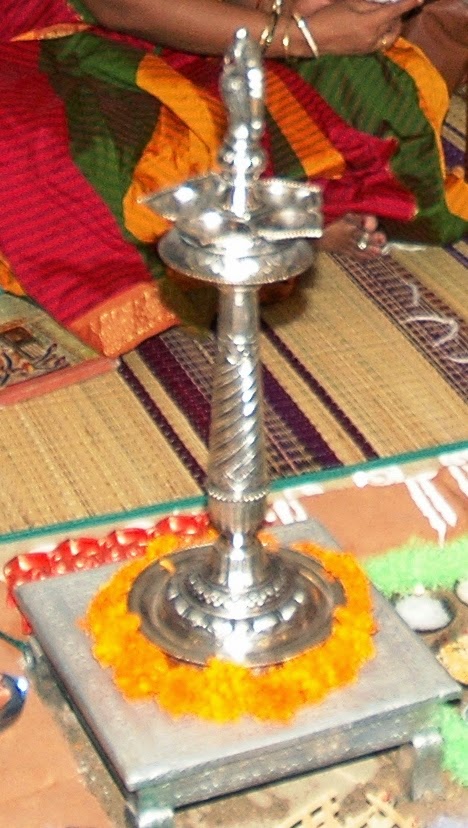 Posted by Ashmita Boopathy Moturi at 3:41 AM